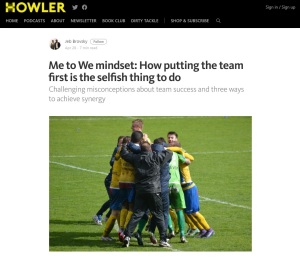 In June 2014, when our plane touched down in Natal, our base for the Group Stage of the 2014 FIFA World Cup in Brazil, I immediately powered up my phone and received a notification from my then fledgling local soccer club, NYC FC. The new franchise had just signed its second player, Jeb Brovsky, after famously landing the Spanish superstar David Villa earlier that year.

At the time, we had no idea who Jeb Brovsky was. But we started chanting his name in the back of the plane, much to the dismay of our fellow travelers. And though the defender only played a single season for the club, with 16 appearances, he will long be remembered for his iconic handlebar mustache.

Even when he was playing for Notre Dame, Brovsky has always been equally active off the pitch. He founded a nonprofit aimed at ending violence against women as well as empowering children through soccer. And he also serves as an ambassador for the Homeless World Cup. So I wasn’t totally surprised to discover that he had recently written an article for Howler, the beloved American soccer quarterly.

The article, entitled “Me to We Mindset,” illustrates the importance of incentivizing teamwork over individual performance in team sports. And, as Brovsky should know, most professional sports – Major League Soccer included – tend to reward individual performance ahead of team performance. And that sort of stars-first mentality could explain the woes of many teams, including my Italian side, Inter Milan.

Although Brovsky’s intention was surely to address the issue in MLS and other soccer leagues, I couldn’t help but think about how the same lessons also apply in the business world. When I was working for agencies in the Havas network, we actually specified that a certain percentage of an individual’s performance would be tied to the overall success of the agency, as a way to incentivize teams to work with other departments, offices, and divisions within the organization. Otherwise, instead of tapping the expertise of others in the agency, which would be most beneficial to our clients, account teams were far more likely to only offer services and solutions they could directly provide from within their own team – reflecting the old adage, a hammer tends to treat everything as if it were a nail.

I also enjoyed his commentary on fame and self-promotion in society as a whole. Once the realm of superstar athletes and business wunderkind, social media has given everyone a platform to easily seek, as Brovsky describes, “admiration and esteem through perpetual self-promotion.” As a result, expressing yourself, and standing out from the crowd, has now become more about the volume of your voice than what you actually have to say. That, of course, can be seen throughout our society, from behavior on the field of play to the Oval Office, as we have come to revere what Brovsky calls “egomaniacal immortality.”

Brovsky’s article is a short, fun read. And whether you are a soccer fan, sports fan, or simply a manager looking for ways to improve your business, I am confident you will find it worth your while.